That’s how Cornflakes with milk are becoming curse for common people in India.

(In continuation of Part-9)

“Avoid milk in any form. In case of special requirement you can take it small quantity with Haldi.” The Traditional Diabetes Experts were giving instruction to the patient from Nepal.

In general milk in any form is not permitted by the Traditional Healers of Chhattisgarh specially to patients suffering from Diabetes. The combination of milk and Haldi i.e. Curcuma longa is age old home remedy in Chhattisgarh. It is recommended for many purposes. After heavy physical exertion it is given to regain the energy. It is used as preventive as well curative to Influenza. It is good combination for old cough. As home remedy it is given as blood purifier specially when someone is suffering from skin diseases and recurring boils. I have noted during interactions with the Traditional Cancer experts that many times they suggest this combination up to many months.

“It is medicine and medicine must not be taken up to long time. Hence, one must avoid taking it up to many years continuously.” The Traditional Healers of Bastar said in clear words.

“One must not drink water atleast 30 minutes after taking this combination. It can affect your throat and voice.” The Traditional Healers of Kanker region warned.

“Always take it with warm milk. Prefer cow’s milk as compared to other types of milks.” It was the instruction of the Healers of Koriya district.

In general as home remedy common Haldi available in market is used with milk. Earlier Haldi was undercultivation without any agrochemicals like other traditional crops but these days Haldi is raised by heavy use of pesticides. Also to give it beautiful and shining yellow colour many types of banned dyes are used. 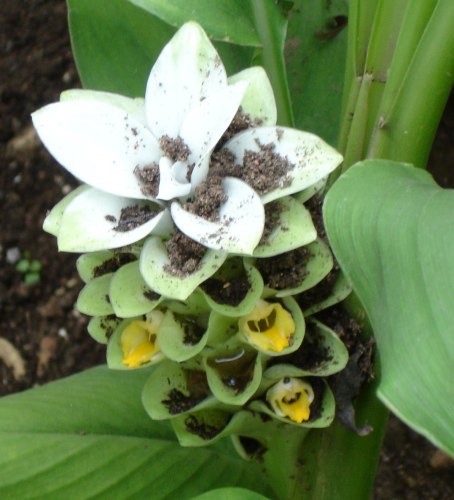 “Haldi available in market is not less than poison. It is better to avoid taking it with milk. The milk available is also not free from pesticides.” The Traditional Healers of Chhattisgarh Plains informed.

They are true. In order to avoid it most of the Healers suggest the patients to take wild Haldi in place of cultivated Haldi. Wild Haldi is still safe from agrochemicals but this Haldi is not easily available. I suggest the natives to grow it their home gardens and use it round the year. I have also prepared a long list of farmers engaged in organic farming of Haldi. In place of Haldi many Healers suggest use of Kali Mirch i.e. Black Pepper and Sonth (Dried Ginger) but these herbs are also having same problem as Haldi.

Many years back I was interacting with the patient suffering from Psoriasis.

“For medicines you can contact to the Traditional Healers. I can suggest some healthy food items that can be added in daily diet. These food items will help in reducing the trouble up to great extent but let me know at first the items you are taking daily.” I said to the patient.

The patient agreed and next day he visited with long list. I found many food items in the list not benefical even harmful for the Psoriasis patients including cornflakes. He was taking it with milk.

In ancient systems of Healing in India including Ayurveda the use of milk with any form of salt is strictly restricted. The patients with skin troubles and also Psoriasis are strictly suggested to avoid this dangerous combination. I have mentioned in previous articles that the combination of milk and fish results in problem of Vitiligo i.e. Leucoderma. The combination of milk and salt is also considered responsible for Vitiligo. It is true with the Psoriasis also. I tried to explain it to the patient.

“But I am taking cornflakes and milk combination with sugar not with salt then why you are suggesting me to delete it from my diet. There are many advantages of this combination. We are taking it since childhood and never heard about any harm of this combination. Even it is recommended by the Medical Practitioners.”

“Yes, you are right that cornflakes are full of good properties but in India salt is added with it in processing and you can find this fact on labels.” I said and requested him to bring the packet.

“Yes, salt is present in it. I never noticed it. Oh my God!!!” The patient shouted from kitchen.

“The combination of cornflakes with salt and milk is a curse for the patients like you. You are taking it since your childhood without knowing this bare fact. I request you to stop using it for few months along with other food items I have selected from your list. I am not adding anything new in your list. I am sure you will get much relief.” I said with confidence.

The Traditional Healers living in remote areas far from modern culture are not aware of daily habit of common people of taking cornflakes like food items Many times when they found their herbs and herbal combination showing no promising results they blame the food items but fail to speificy it. It develops anger in patients. And many of them stop the treatment and shift to other Healers for new treatment. It is common but very odd situation the Healers face.

“Thanks sir, the severity of the trouble has decreased and it seems that your recommendation worked. I have taken no additional medicine and just changed the food habits.” It was the call of patient who stopped using Cornflakes milk combination up to few months. This result was expected.

“His skin color is becoming darker day by day. He is loosing weight and also it seems that he may die within a week. Please come to meet him as soon as possible.” His friend called to me. Without any delay I travelled to meet Vinod.

“Ye kaa kar dales Vinod? (What you have done Vinod?)” This was my first response.

Shri Vinod is sincere researcher in Mother Nature’s Experimental Field. Although he is family man but still he takes risk of eating and testing new herbs mainly herbs declared as toxic by senior Healers. He has risked his life many times but his experimentations resulted in wonderful new findings about herbs. I always suggest him to stop further experiments as before meeting me he has already done a lot in this field.

This time he consumed different plant parts of Nagin Jadi i.e. Wattakaka species. It is Traditional Medicine and used in complicated diseases under strict supervision of the Traditional Healers but Vinod consumed it not as medicine but as food up to many days. The symptoms I was observing were of Nagin toxicity.

“Saheb, it is my fault. I started this experimentation with holy purpose but now from this stage it is very difficult to return back. I tried all available antidotes but failed. My condition is very bad and now I accepted the fact that my end is ne--.” He started crying without completing the sentence. It was really shocking for me.

The ancient as well as modern medical literature gives no information about antidote of Nagin toxicity. I decided to take him to the Traditional Healers of Orissa. They were not in touch from many years and far from modern communication systems. I decided to take risk and instructed my driver to start.

After three hours of drive in forest road we reached to the Healers. They were treating the patients. When they saw me and got the information about poor condition of another Healer i.e. Vinod without any delay they started asking questions to him. It was new kind of case for the Healers also. They discussed and started treatment. They arranged milk of black cow in large quantity and started Milk Therapy. Up to two days Vinod was given several litres of milk as single diet.

”It is just experimentation as we have never faced such sitatuation.” The Healers said clearly. The condition continued to deteriorate. But still the Healers continued the therapy. Four days of this Therapy resulted in loose motions and through stool the toxin started coming out. Cow milk cleared the toxin complete but it took very long time. Later the Traditional Healers informed that they use this Milk Therapy in case of Datura poisoning. It acts in miraculous ways within few hours but in this case it took very long time. It was mercy of God which saved him. The Healers informed. There was great sign of relief on their faces.

Later when I discussed this complicated case with the Traditional Healers of Jharkhand they suggested many herbs. “Milk is very good for such cases but we add many types of medicinal herbs with it in order to make the treatment more effective. You have to give these herbs only with milk, no other medium.” They said.

Milk is not digestible to everyone. I know many natives of different age groups having no capacity to tolerate milk. Milk in any form and quantity results in loose motions in such cases. I was wondering if any such native consumes Nagin herb accidentally then what will be the mode of treatment by the Healers?  I got answer many years later from the Healers of Southern Chhattisgarh.

They suggested use of 7 types of herbs, one per day from Monday to Sunday and then repetition of it again in same manner. They claimed that milk is good remedy but for permanent cure long term treatment is required. They start treatment with these herbs and use milk after it. The seven herbs they are using are not rare herbs. Most of these herbs were available in nearby forest.

After getting this vital knowledge I visited to the Traditional Healers who treated Vinod and shared this valuable knowledge. It was new information and they welcomed it. They also planned to meet the Healers of Southern Chhattisgarh with gifts.